What does it take to stage one of the most enigmatic musicals Malaysia has seen? Complicated set-ups, intricate costumes and hours of make-up – and those are just the easy parts! Nathan Brine, producer of Madagascar The Musical, gives us a glimpse of what happens behind the scene.

You’ve seen the movie with its colourful jungle world, lively characters and entertaining performances. Now, imagine it live on stage right in front of your eyes! From 5 to 8 December 2019, your favourite characters from the smash-hit DreamWorks animated motion picture Madagascar will be performing live at The Plenary Hall at KLCC, bringing you joy and laughter through dance and music in this musical adaptation. 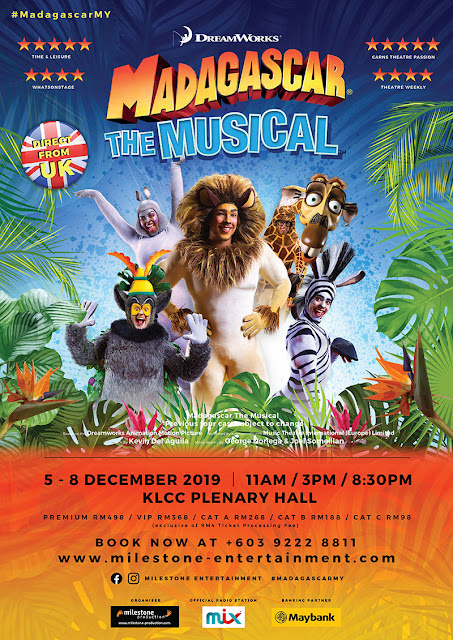 What does it take to adapt a motion picture into real-life entertainment? A lot of research, planning, hard work and sweat! Everything – from the set to the characters – has to look and feel the same as the movie; more importantly, the audience has to be just as captivated and entertained (if not more!). And with the musical being staged live, there’s no room for mistakes.

This challenging task falls on Nathan Brine, producer of the musical, and his crew. Where does it begin? With finding the right cast and starting rehearsals almost immediately, says Brine. “A month before we started rehearsals, we did the casting for the new tour which took just over three weeks in total. The rehearsal process was three weeks in a rehearsal room and then a week of tech at a venue in the UK,” he explains.

Then there is the challenge of bringing the script to life. It’s one thing watching the movie where special effects and editing are used to make it believable. Live on stage, without any movie-making magic to fall back to, how do you bring such a well-loved animation to life with humans playing animals? 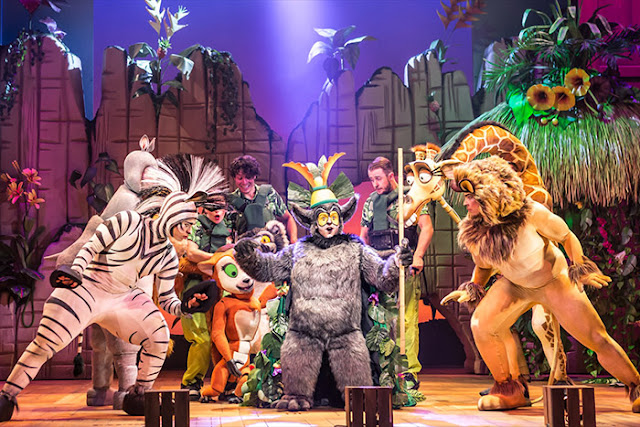 For starters, costumes and make-up have to be believable, says Brine. The musical features some of the most intricate costumes any production has seen. The most complicated would be King Julien’s. “Imagine putting on all of your big winter coats at the same time and then getting down on your knees to do a full dance routine – that’s what King Julien is basically doing!

“As for make-up, all of the Zoosters have very specific make-up design so none of them are easy. It can take an actor anything from 30 minutes to an hour to put on their costume and have their make-up done. Also, during the show, there are a number of actors who change from one character to another and they sometimes have as little as under a minute to do so,” adds Brine.

Madagascar The Musical has played in some of the biggest venues in the UK. Malaysia is the first in Southeast Asia to host it since its acclaimed UK tour. For a touring musical, this change of venue can be particularly challenging. “When touring, the biggest limitations are the varying sizes of stages and their technical capabilities. The musical has had to adapt and upscale as well as downscale many times. Some venues don’t have flying capabilities for example, which means certain elements for the show have to be cut – but the show still works extremely well and looks amazing in whatever venue we play,” he says. 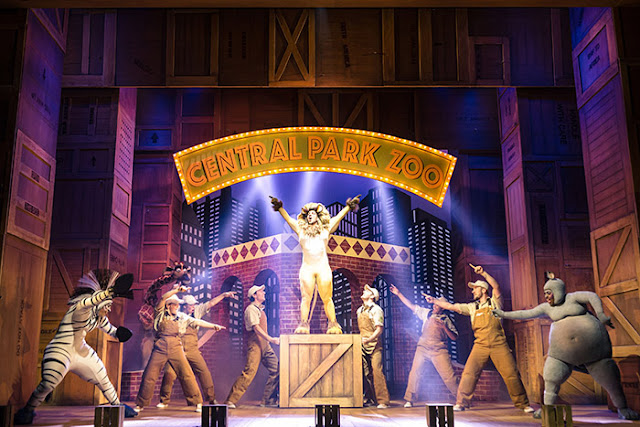 Making sure the stage is set right also ensures the production goes smoothly from start to end without glitches that may disrupt the performances. Imagine if the characters stumble on stage because of a misplaced prop! Which is why flawless stage set-up is extremely vital for the high-energy musical, with different scenes taking place almost constantly.

The biggest scene would be the opening at Central Park Zoo, says Brine, with multiple crates, the big zoo doors as well as individual characters performing on stage. “It is very busy but it happens right at the top of the show so everyone is fully prepared,” he shares. The most complicated scene, he says, is the end of act one on the ship. “This has the big animal crates as well as the penguin crates, boxes and the ship’s wheel. It all comes on quickly but then has to disappear just as quickly in small blackout moments. It is always tricky to get it all timed perfectly.”

With these set in place for the Malaysian tour, Brine is confident that the Malaysian audience will have a thrilling time. “The scenery, the costumes and the music are all incredible. It sometimes feel as though you are watching the animated film but live and right in front of you. We hope the audience will be thinking what a wonderful, energetic and visually stunning production. Almost everyone who’s seen our musical end up singing ‘I like to move it, move it’ for a long time after the curtain comes down,” says Brine.

Join Alex the Lion, Marty the Zebra, Melman the Giraffe and Gloria the Hippo as they bring you on an exciting adventure as they escape from their home in New York’s Central Park Zoo and enter into a madcap world of the hilarious King Julien in Madagascar. Produced in the UK in collaboration with DreamWorks, Madagascar The Musical will feature iconic songs including “I Like To Move It, Move It’ and other new songs that will surely keep audiences moving to the beat.

For more information on the show, cast and where to purchase tickets, visit www.milestone-entertainment.com or www.facebook.com/MilestoneEntertainment.Show/