24 Feb 2019 – Eminem has broken the all-time record at the Melbourne Cricket Ground with 80,708 fans in attendance of his Rapture 2019 Australia/New Zealand tour, just one day after the 20th anniversary of The Slim Shady LP, means that Mather’s’ alter ego is the same age today. “Slim Shady is 20 years old, so that’s how come I can act like a muthafucking asshole,” said Mather’s to the crowd. 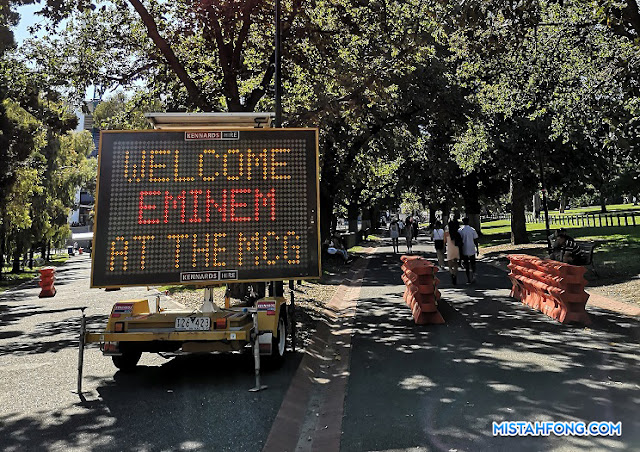 The show started with Boogie, Shady Records’ latest signee from Compton who just released his debut album “Everything for Sale” recently. Bringing us some west coast flavour such as “Nigga Needs” & “Self Destruction”. Later, the 2nd act of the evening and half of the Bad Meets Evil duo; Royce da 5’9″ started the show with “Woke“, Slaughterhouse’s “Microphone”, PRhyme’s “Streets At Night”, Bad Meets Evil’s 2011 anthem “Lighters” and hits from his best selling album to date “Book of Ryan”. Lastly, Adelaide’s own Hilltop Hoods took to the stage to close the evening as 3rd supporting act bringing the crowd their hits such as “Chase That Feeling”, “I Love It”, “The Nosebleed Section”, “Won’t Let You Down” and more. 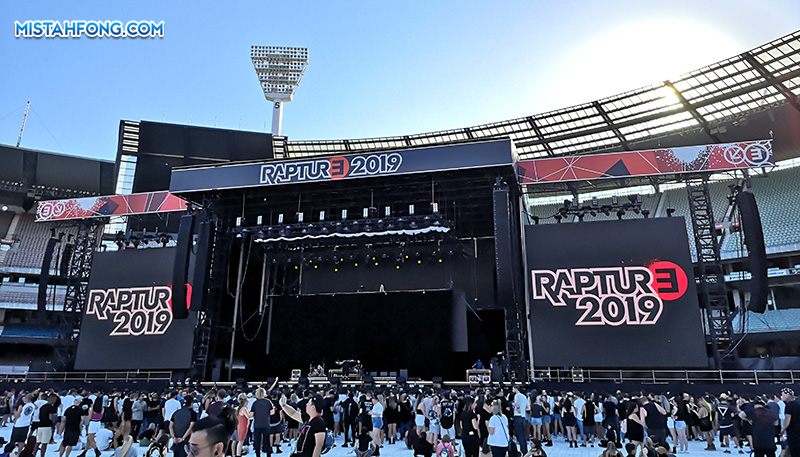 As the anticipation builds for Eminem to take the stage, the lights go out and a cinematic visual shows a Godzilla-sized Eminem stomping around a city destroying the buildings. Later, the introduction of “The Greatest” from his surprise album “Kamikaze” last year filled the air, as Eminem burst onto the stage with a full live band accompanied by his hypeman and ex-D12 member; Mr.Porter plus fireworks and the crowd lose their minds.

The Detroiter later served us Recovery “Wont Back Down” & “3 AM”, The Eminem Show “Square Dance” and classic The Marshall Mathers LP “Kill You” that ended with the sound of faux gunshots at the end. After “White America”, fans witnessed him switching gears doing that rapid fire syllables on “Rap God”, “Lucky You” and his verse of Drake’s “Forever”.

The highlight of the night was the massive sea of phone lights which lit up the stadium for “Sing For The Moment” set and “Like Toy Soldiers” dedicated to his late best friend Proof of D12. At 47, he was so was energetic, jumping back and forth around the stage showing off his refined performance.

He dived back into his classic controversial catalogue and pulls out tracks like with the equally-powerful anthems “Just Don’t Give A Fuck “, “Fall”, “Criminal”, and “The Way I Am”, to show off his rage. Running around from left to right stage making sure that those seated tickets buyers get a glimpse of him.

American singer Skylar Grey, backed by an orchestra joins Em dishing out a mesmerizing performance taking over the chorus of Beyonce’s “Walk On Water”, Rihanna’s “Love The Way You Lie”, and Dido’s “Stan”. During the “Stan” set, the crowd went wild when Em changed the “remember when we met in Denver” line to Melbourne. Also he pulled up his shirt when the line “i even got a tattoo of your name across the chest” that makes all the fan girls go even crazier and he ended his verse of Nicki Minaj’s “Majesty”.

There was one moment when the crowd chanted Killshot ! Killshot ! begging Eminem to perform the his latest diss-track of Machine Gun Kelly, and Eminem responded “I don’t think it’s cool to disrespect the dead” and the crowds went nuts.

After amazing versions of Rick Rubin produced “Berzerk”, he continues with ”Till I Collapse”; tribute to the late Nate Dogg and mixed the Queens “We Will Rock You” in “Cinderella Man”. Royce da 5’9” took over the stage solo for “Caterpillar” and Em’ returned to the stage for “Fast Lane” both song from their album melding together as Bad Meets Evil. Boogie joined the stage and performed his own hit “Rainy Dayz” which featured the Shady Records boss. He brought back Skylar Grey to the stage for the 2017 hit “The Monster”, after the song Em asked the crowd to sing a “Happy Birthday” for Skylar, a massive 80k people sang along making it a special birthday night for Skylar.

Also the self-proclaimed king of selfies, Eminem & Mr.Porter did not forget to take a legendary selfie with the 80k crowd but sadly turned out the picture was overexposed, please stick to music Em’

One after the another we were treated to his ultimate hit singles including “My Name Is”, “The Real Slim Shady” and “Without Me”, showcasing Mathers’s decades of success. Closing his main set with a speech of heartfelt appreciation to his fans and leaving us with 2010 anthem “Not Afraid”.

As chants of encore filled the stadium, a piano intro and later the famous guitar riff “Lose Yourself” rang out, the Rap God returned for one last time and this time we all go all out. As that iconic riff pumped through the arena, a deafening roar rang out, as it became clear that no one could escape the iconic flow and lyrical mastery of Oscar Best Song winner. Most of fans followed to rap not only on chorus but from start until the song end. Definitely a true Stan !