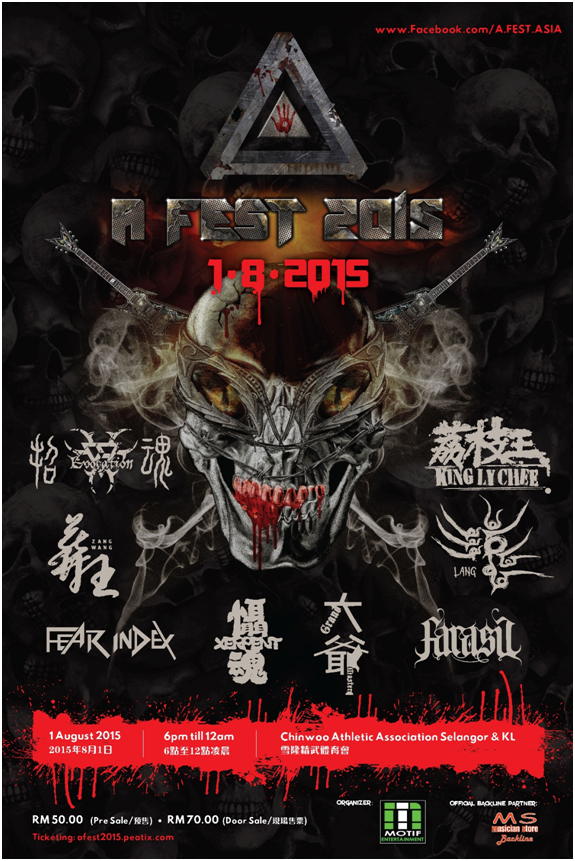 The annual Malaysia’s metal festival, A Fest – is ready to rock fellow Malaysian metal-heads with their second edition of the festival, ready to kick off at Stadium Chinwoo, Kuala Lumpur on 1 August 2015!

In this era of economic downturn in Malaysia, A Fest taking into account of the burden of the people so the fares are set on reasonable and can be consumed. And we insist that all the participating band at lease have 30 minute perform time.

This year, the festival has some promising metal bands as headliners who are ready to wreck the stage! Also, some of them come all the way from Hong Kong, they include:-

You can purchase you ticket online via: http://afest2015.peatix.com

King Ly Chee was formed in May of 1999 fueled by the fire and passion of a form music called hardcore. In 1999, the music climate of Hong Kong was an unhealthy world of cover bands passing themselves off as “hardcore” or “metal” while belting out tunes by Limp Bizkit. The founder of King Ly Chee, Riz, had enough and one day, he decided that it was time that someone set the record straight on what “hardcore” truly implies. He set off on the mammoth task by releasing a bilingual zine called Start From Scratch that included interviews, essays and CD reviews of world-renown punk, metal and hardcore bands. As the wheels were turning for Start From Scratch, Riz sat back and realized that words were not enough, kids in Hong Kong needed to hear, feel and see “hardcore” in action to fully absorb the impact. King Ly Chee was the result. This band has tirelessly continued down this mission for over 12 years now through their sheer determination and passion for hardcore, they have taken their sounds, energy and hearts to surrounding Asian countries, and Europe, helping establish the name “King Ly Chee” as a truly Asian band. 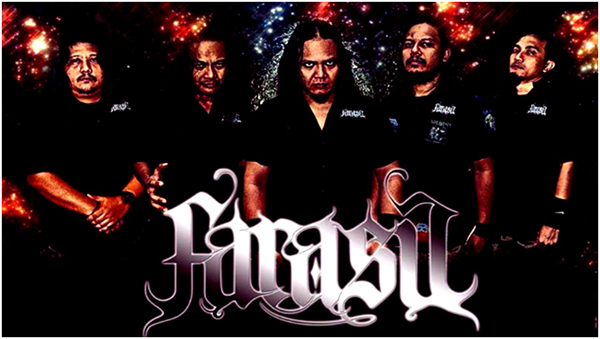 “Farasu” originally formed by Nahak, bull and Fidaiyyin on 12th december 2002, The band consists of line up from the ashes of brave In Vision and Iron Storm. Farasu open its 1st stage performance at ” Eastern Loudness” gig in year 2003. “A Millennium of Madness” demo is early material produce by Farasu, it was recorded on year 2003 included 3 own songs + 2 cover songs by Athotorgh. Early 2005, Farasu come with a promo cd ” Midnight Ever Spirit promo cd” and in year end of 2005 Farasu come with live mcd-” Blackmoon Eclipse”. In May 2007, The line up had changed with coming back Nahak and bull with new Vox-Arm, after kotam, Auk and Taba step out from the lineup…. This changing lineup had bring back ” The True Spirit of Farasu” for alive with their eastern melodic death thrash music direction. 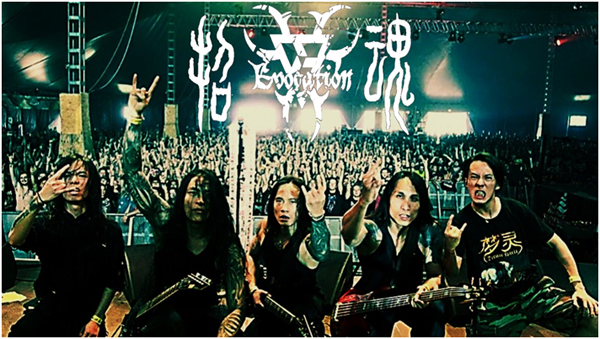 “Evocation HK” is formed in 2002, Evocation 招魂 is considered to be one of the leading black death metal bands in HK. It was founded by Tomy Chiu, the vocal and guitarist and there was a few lineup shifts in the past 11 years. And the current lineup was formed since 2010: Tai Tam (Guitar), Chung Chow (Bass), Man Leung (Drums), Jamline Lo (Synth) Evocation招魂 won a 4th prize among 30 bands from all around the world in Wacken Open Air 2014 – Metal Battle. First ever in HK history. Evocation招魂 is characterized by its blending of Eastern instrumentation and black death metal. Much of the lyrical content is based on the interest in Taoism, Buddhism and the related evocation rites. Songs are written to inspire and awake the mass to walk out of the control of the authoritative dictatorship of any aspect. 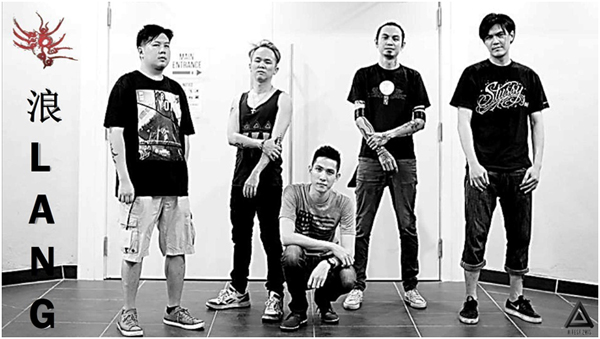 “Lang ” is formed in July year 2005, it is Malaysia rare Chinese new metal band. Wandering hesitate to sail with the lineup came to the first 10 years, The lineup are Luke (vocals), Ken (bassist), Aluba (guitarist), Lo (guitarist), CY (drummer). They want their music like waves generally dynamic and scalable, able to calm; Many experienced destruction and restructuring, is the ideal catalyst metal sublimation. But also created the orchestra now in sound, spin, rhythm, the heart of the ultimate form of integration. “Lang” music, no fancy packaging metal rock, but rather hard work refining the core meaning of the word is not much nonsense, straight to the point of internal organs roar and tear, but only in the creation of this rare form, We can give them is high scores of admiration from the audience had, until enjoying their live performances every time, which is testimony to the sidelines of the phenomenon. 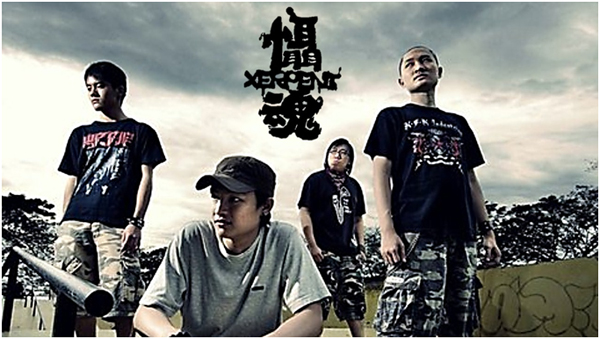 The one and only Chinese-singing grindcore band in the scene, “Xerpent” is probably the sole flag-carrier of the genre, their music style was also tagged as “brutal death metal”. The band draws inspiration from some of the pioneers of the grindcore, with heavily distorted, down-tuned guitars, high speed tempo, blast beats, and vocals which consist of growls and high-pitched screams. Lyrical themes range from a primary focus on social and political concerns, to gory subject matter and black humor. 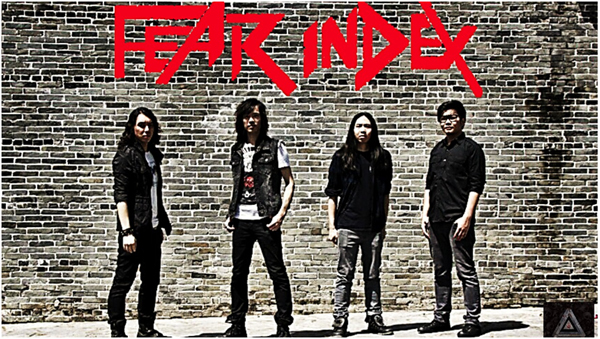 “Fear Index” is a new breed of thrash metal band from Hong Kong,  They has a more passionate than the rock and the atmosphere, so they won the championship in a local band competitions, apart from pop and rock music in a congregation. They worked for Chinese heavy metal band “Tang Dynasty” and “suffocation band” tour as a guest band. The band not only to retain the traditional style of thrash metal in the rhythm characteristics, has also joined the heavy rock melodic phrases. Let the rhythm of the songs in both his head and also has an easy, bearing in mind paragraph. 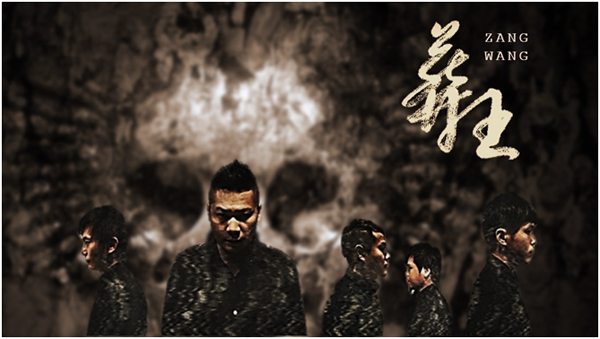 The one and only Chinese metalcore band in the scene, Zang Wang is a new generation Malaysian Chinese metalcore band and founded in year 2004. After years of repeated changes and adjustments style vocalist, During 2005, the current vocalist joined the band brings a new spirits. This time the music began to favor heavy metal elements. Vocals black chamber roar, with full understanding of the twin guitars, heavy bass and drums traditional double stepped through coordination and honed over time, the band finally chose to favor relatively for metalcore music. Their inspirational music encourages people whom faced with a lot of obstacle in their path to success, to continue fighting and don’t give up easily. 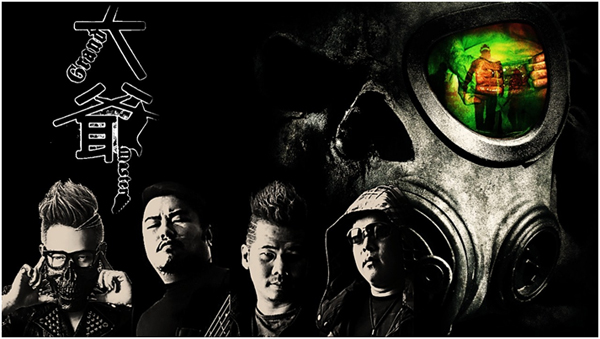 This nu metal rapcore band is the new band form by 3 professional musician in year 2015 with one opportunity when they met the vocalist “Monkey D” (the spark creator). The guitarist, bassist and drummer are play in the same band before this, since last year they quit from the band and focus on their own development in music industry. The love of music is always there. Finally they form this new band with the vocalist ” Monkey D” for more suitable to carry on their music. With full coordinate of diversification on vocals, skillful guitars, heavy bass and dramatic drums rhythms, the band finally chose to favor relatively for nu metal rapcore music.

More info about A Fest 2015 at https://www.facebook.com/A.Fest.Asia