KUALA LUMPUR, 8 October 2016 – The comeback of H-Artistry 2016 – The Global Art of Mixing returns after a one-year hiatus. An awesome party for music lovers around the nation brought a spectacular night of world class performances with stellar line-up of musical acts from a range of genres from rock to R&B , K-Pop and EDM. 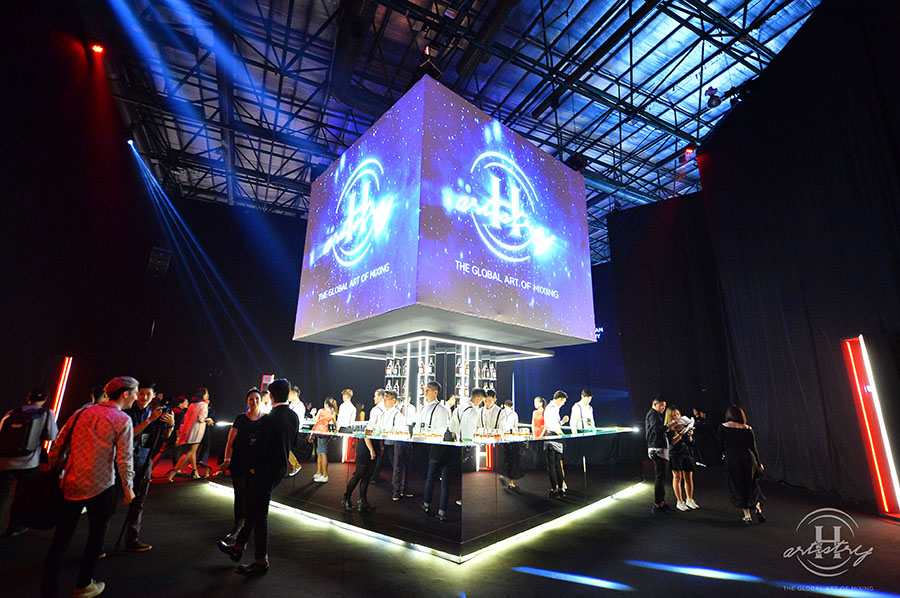 H-Artistry 2016 also streamed live for the very first time on the official website, giving music lovers around Malaysia the chance to catch their favourite acts no matter where they are. The live show gave viewers an exclusive look into what went behind H-Artistry 2016, from red carpet interviews to exclusive backstage looks with some of the H-Artistry performers and collaborators. 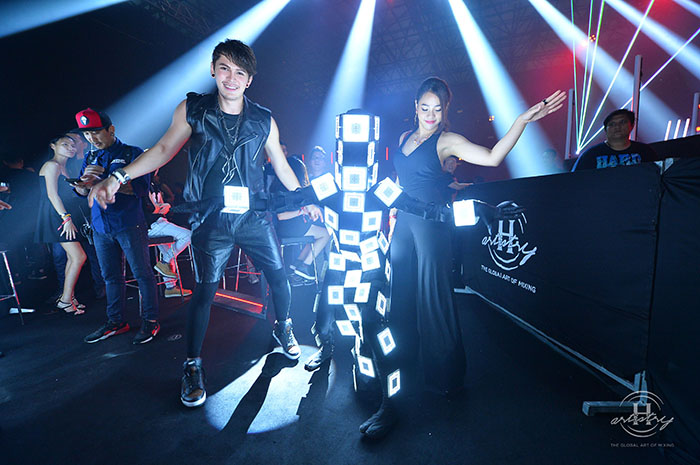 Always evolving and reinventing itself, H-Artistry 2016 elevated the Global Art of Mixing through new collaborations, emerging music, and various other advances in the fields of art, taste and fashion, cumulating in a celebration for the sense of those who dare to dream. This year, H-Artistry provided a platform for varied Malaysian talent to showcase their abilities, collaborating at the event to create a new Art of Mixing experience. 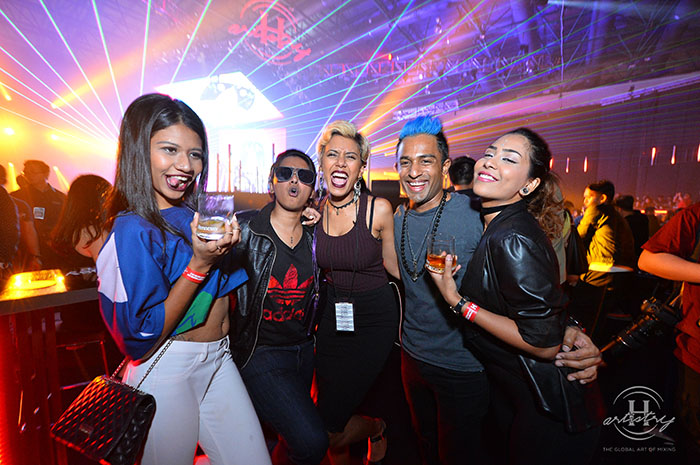 Guests were amazed as they entered the first of two distinctively unique rooms. Curated by Hugh Koh (co-founder of Pestle & Mortar)  and Angel Ng (chief bartender from PS150), the Pride and Precedent room’s setup showcased a journey; one of lifestyles with roots in South East Asia. Being trail blazers in their fields among Malaysians, Angel and Hugh’s room were testaments to their national pride. Hugh’s installation featured t-shirts hanging from the ceiling with images of Southeast Asia projected onto them. “South by Southeast”, the cocktail curated by Angel also carried the same theme, with hints of rice wine, ginger and gula Melaka all mixed with Hennessy V.S.O.P, it was the embodiment of a true Malaysian cocktail which definitely had guests craving for more. 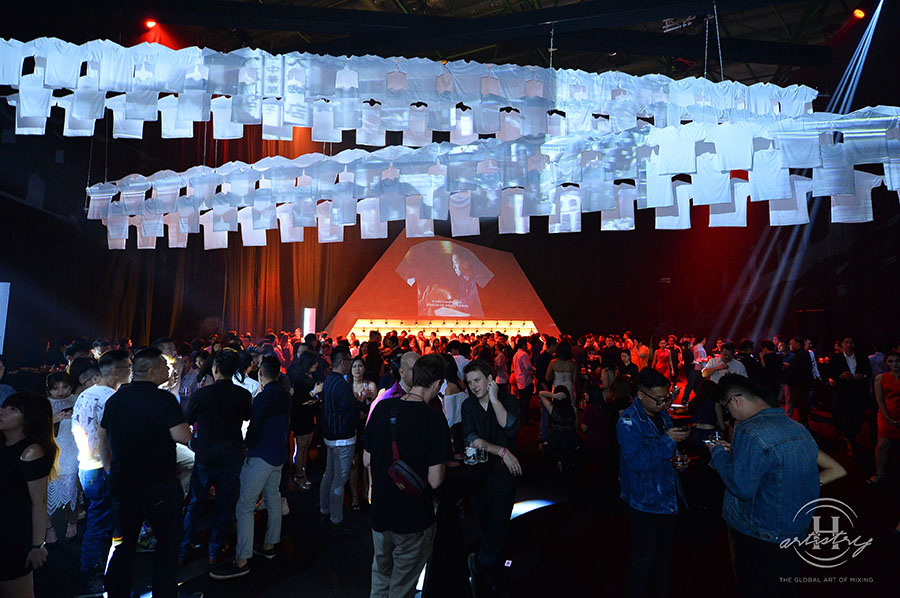 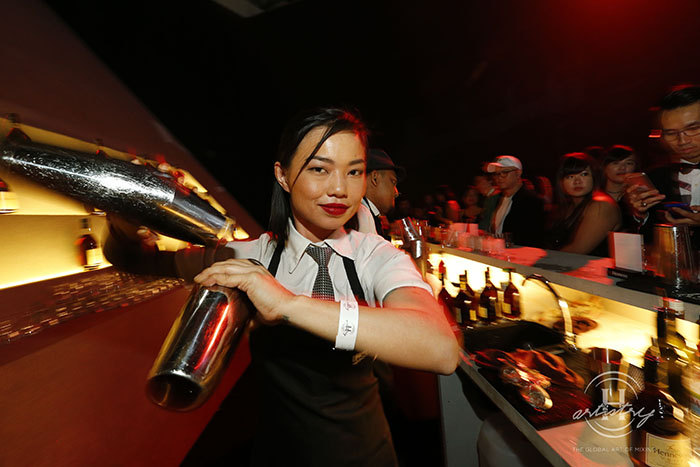 The second room, dubbed The Blooming Spark room by Andrew Tan (mixologist and owner of HYDE) and Jun Ong, was a tribute to how greatness can bloom from the simplest spark of inspiration. Light artist Jun Ong created an interactive light sculpture in the shape of a spark which got guests capturing and sharing images throughout the night. The theme of blooming into greatness was also translated into Andrew’s cocktail. The aptly named “In Full Bloom” was mainly inspired by the earthy and flowery aspects of foliage, resulting in an experience that balances the masculinity of Hennessy V.S.O.P with sweet and floral notes of Jasmine and Elder flower. 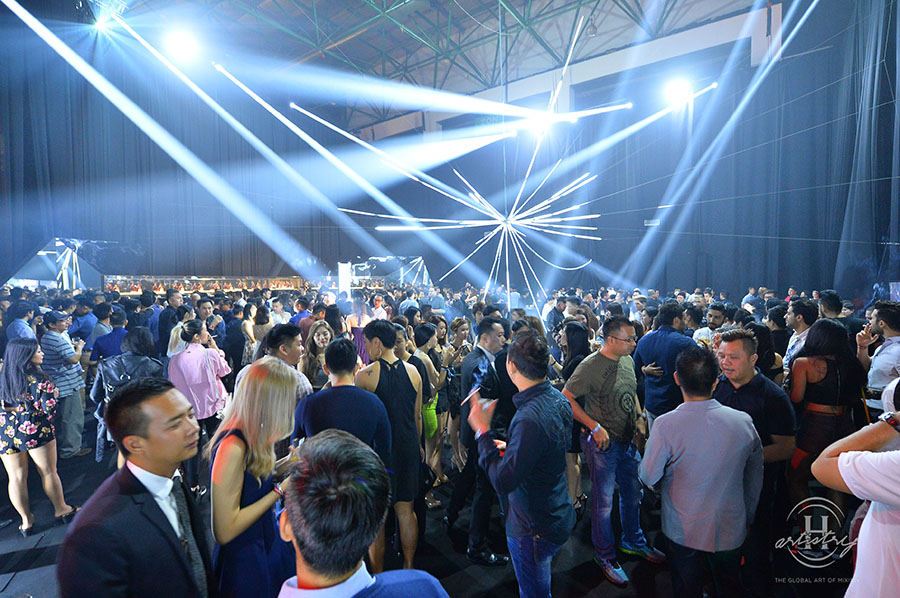 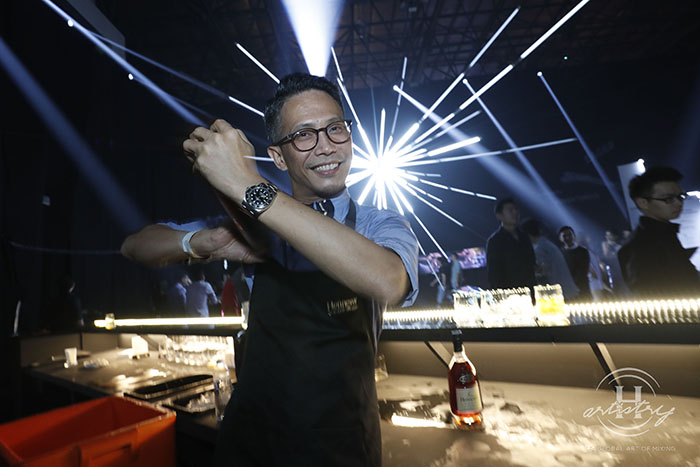 First to take the stage was a special collaboration among local artists Jin Hackman, Shawn Lee & Daniel V who displayed the essence of H-Artistry and the Global Art of Mixing, bringing their own distinct styles to create a one of a kind show. They got the crowd amped by Jin’s version of “Cant Hold Us” (Macklemore & Ryan Lewis)  x “Closer” (The Chainsmoker) featured an orchestra led by Daniel V which contrasting yet synergystic amalgam of Jin’s rap and Sean’s beat boxing. The set ended with Jin’s guest performer, battle rapper champion Tactmatic with his latest song “I’m Alive”.

One of the headliner, Malaysia’s latest rock band Mad August took the stage as second act of the night. The band performed several rocking song from their new album “First Instinct” also the classics from their debut album “Mad August”. They sent the room into fits of reckless energy, creating an amazing amount of noise for four guys who kept working the crowd from every angle. 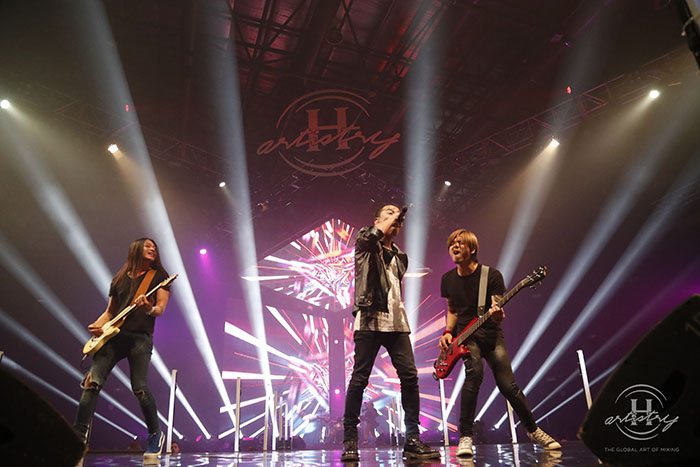 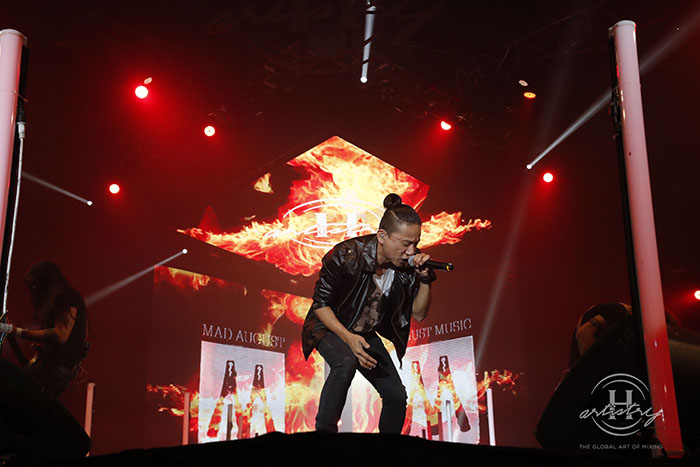 Rising superstar Tinashe also got to perform her first show in Malaysia. Opening with her recent new banger, “Ride of Your Life” with awesome choreography combined with powerful vocals, she then rallied her backup dancers for her raunchy trap-inspired “Party Favors” , where she contorted her body through a whole series of eye catching pop-and-lock moves. The night continued with Calvin Harris’s produced track “Dollar Signs”, the skittering steel-drum drop were makes everybody move their body. Tinashe’s choreography was magnetic without compromising her vocal output. She kept the crowd moving with her stunning performance of “All Hands on Deck” & “Superlove”. The set ended with chart-topping hit “2 On” produced by DJ Mustard and left us with a real strong finish. 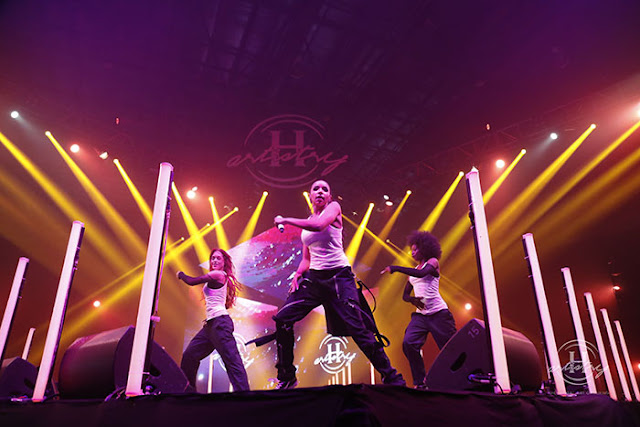 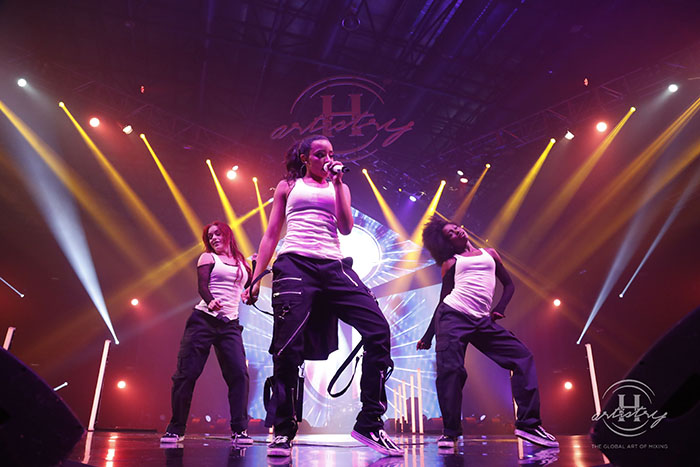 Next was K-Pop sensation Hyuna, who started the show with trap-influenced hip-hop style track “How This ?” continued by a club banger “Freaky” both singles from her latest album “A’wesome”. The song was followed by the high energy track, “Roll Deep”. Strutting around and dancing in high heels, she brought the energy level to the max with her show-stopping set with her sexy dance on “Change”, bootylicious “Bubble Pop” and ended with her 2014 hit “Red”. 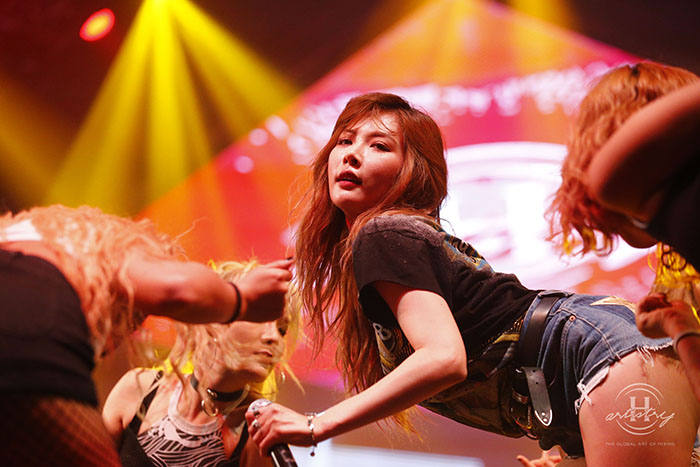 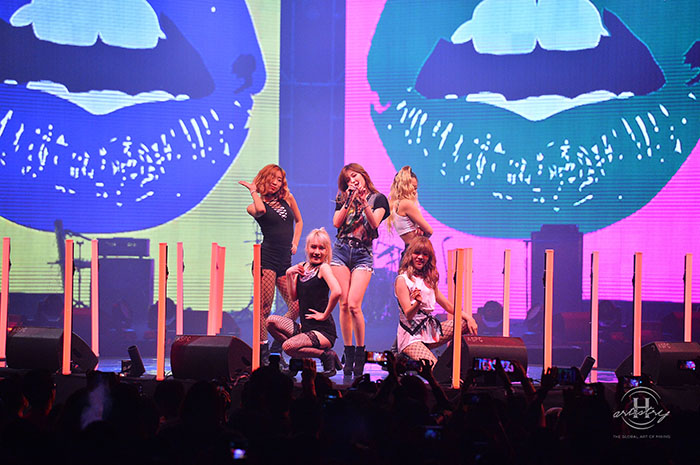 Final act of the night, all the way from the US of A, Crizzly’s! He murdered his set with signature style (a hybrid of EDM and Hip-Hop that he calls ‘Crunksteps’). Crizzly’s set kicked the audience straight to the gutter with his heavy-hitting beats and remixes of popular hip-hop and rap anthems such as  “Drop It Like Its Hot” (Snoop Dogg), “All I Do Is Win” (DJ Khaled), “Im Going In” (Lil Wayne), “Party Up (Up In Here)” (DMX). Crowd go wild when he drop the “Chain Hang Low” (Jibbs) remix. Random spurts of drum’n’bass kept things lively and infused the show with energy at all the right times. Perfect ending the night with a bangin bass. 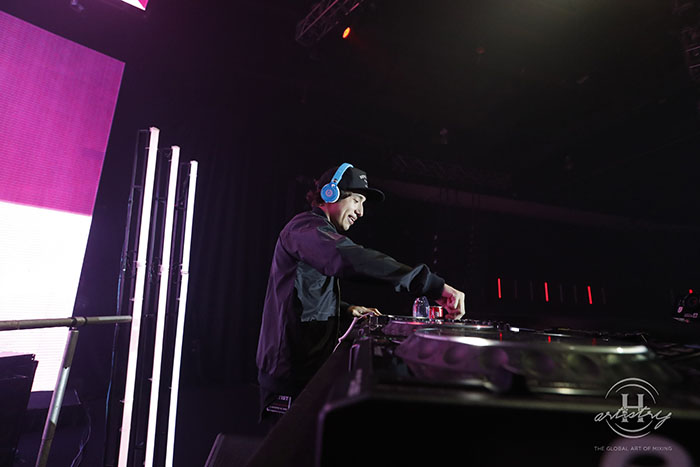 H-Artistry – The Global Art of Mixing 2016 continues to grow and impress year by year. The production on this tour is top notch, especially the excellent illumination which gave each track a different feel. The stunning LED visuals combined with the ambiance were incredible throughout the space. They really took the party to the next level. Giving guests an extraordinary night of amazing artists, delicious cocktails and of course, for the viewers at home, an exclusive look into an unforgettable show through the miracle of cyberspace.