‘Coaster’: The world’s first film made from beer coasters

Drawing inspiration from the brew’s philosophy of ‘It all starts with white’ comes ‘Coaster’ – Tiger White’s first crowd-sourced film project made by Malaysia’s creative talents with mentoring by ‘Everest’ director, Baltasar Kormákur.

DEC 19 – It was unexpected; the short film was shot in three days and resulted in a thrilling, suspenseful movie that had the audience of Coaster’s exclusive screening at Glasshouse at Seputeh gasping and applauding a job well done. The tale tells the story of a young chef faced with a vengeance dilemma: should or shouldn’t he plate up the perfect revenge when he was hired to cook for the very mobster responsible for his father’s death? 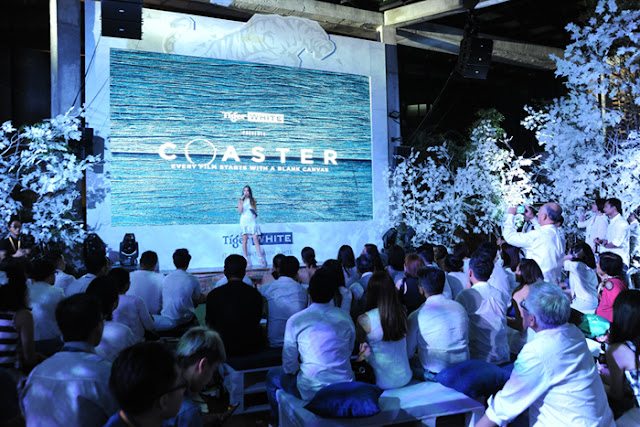 Emcee Nadia Heng welcomes guests to the exclusive screening of Coaster held at Glasshouse at Seputeh on Dec 19.

The project was proof of the newly launched Tiger White’s simple philosophy – ‘It all starts with white’, which represents the idea that anybody can create anything if they have the courage to face a blank sheet of paper and start. It is this same resilience that framed the birth of the all new wheat variant.
Drawing inspiration from the brew’s attitude, some 5,000 physical coasters were given to selected bars and cafes in Malaysia from October with tigercoasterfilm.com hosting digital versions. These coasters served as blank canvases for young creative talents to enter and take on roles in the production from screenwriters to hair stylists to actors and even runners. We Jun and Lim Benji were the first two selected for the all-important roles of director and screenwriter respectively. Both these homegrown talents were instrumental in laying the groundwork, and crafting the plot whilst taking advice from Baltasar Kormákur (Everest, The Deep) 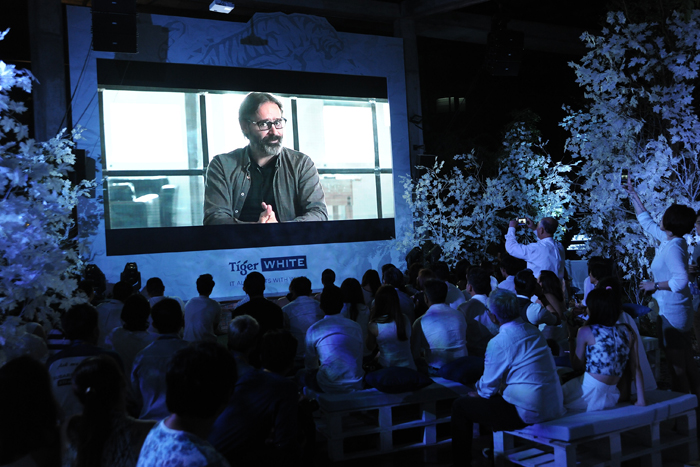 A special message from Everest director Baltasar Kormákur, who mentored the production of Coaster.

“I’m very excited to be a part of the Coaster production. I’ve scaled mountains to make a film, I’ve swam in the North Atlantic Ocean to make a film, but I’ve never recruited people from beer coasters to make a film before. I’m a big believer that you can achieve anything you want, wherever you are and whether you’re from Iceland or Malaysia. If you dream big, you’ll achieve big and I’m sure together we’ve created something special,” Kormákur said. 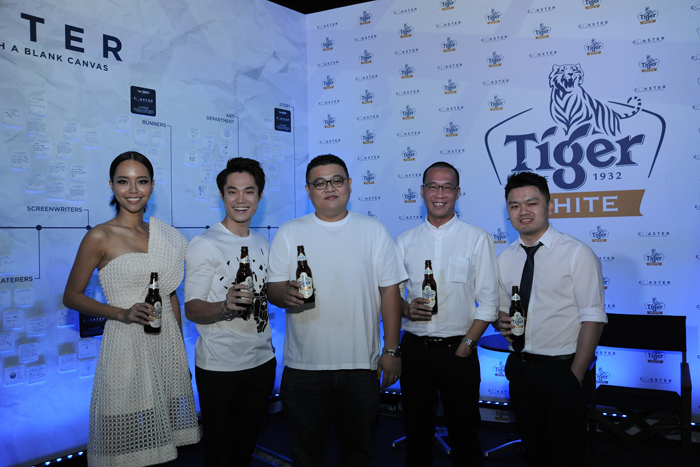 As for We Jun, submitting his application and getting accepted was a huge step forward in his career. Having dabbled in little filmmaking projects of his own, We Jun has never dreamt it was possible to be a part of a production of this magnitude. “It wasn’t very long ago that I was working in a bank, following a path I didn’t want to take. I’ve made a few films before but none like this. I mean, we were mentored by Baltasar Kormákur … for a short film production … how many people can say that? It’s just unbelievable,” expressed We Jun. 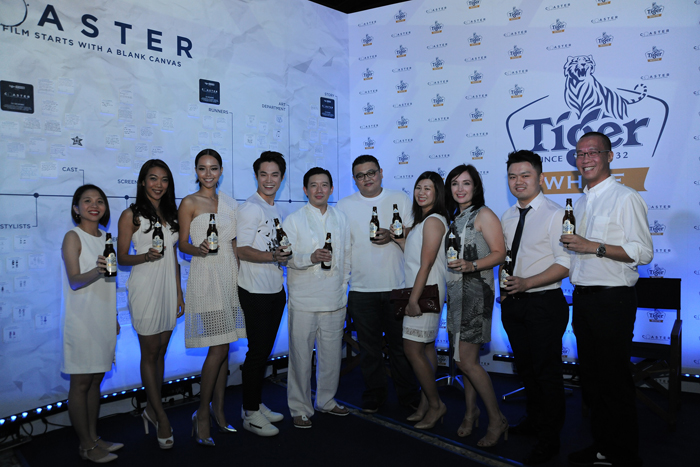 Tiger Beer Marketing Manager Jessie Chuah said the project is unlike anything they have done before and is excited by how well it came together. “It’s amazing to see how a simple notion or philosophy has set the stage for young, talented Malaysians to unleash their creativity. We’ve learnt that there’s a large artistic and inspiring pool of untapped talents all found through beer coasters.”
“We’re really appreciative that a director as well respected and passionate as Baltasar was so keen on joining the project. He truly is a master in his own right and very befitting as a mentor. He possesses the right outlook as a filmmaker to guide our Malaysian talents along,” Chuah added. 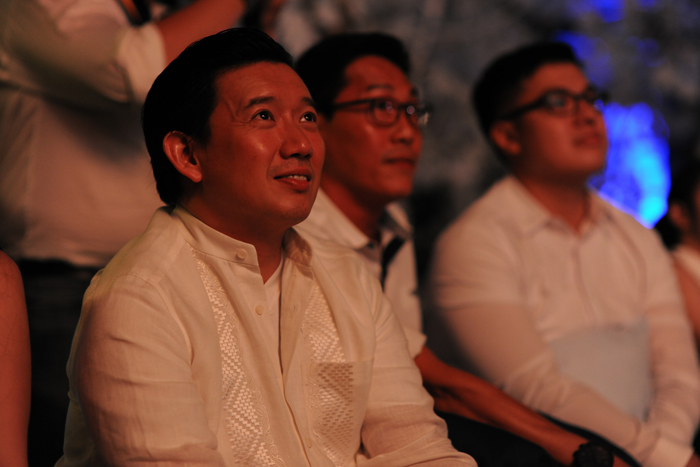 Hong Kong actor Chapman To made a special appearance at the exclusive screening of Coaster. 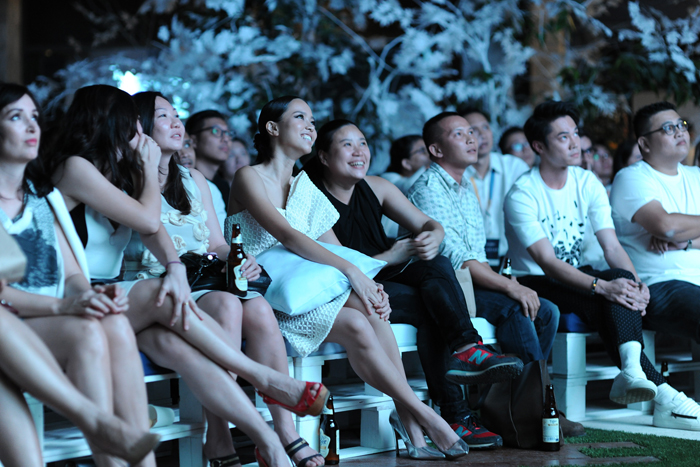 Coaster was shot at locations around Kuala Lumpur. Typical with every film production, challenges were faced every day and overcame, providing an exciting taste of life on set for the 25 Coaster contest winners identified via the crowd-sourcing initiative mooted by Tiger White — Asia’s Wheat Beer. The introduction of Tiger White proves once again that Tiger Beer does not rest on its laurels and constantly pushes the boundaries of innovation, to create fresh and exciting brews for its consumers. Through Coaster, the all-new innovative product sets out to inspire young Malaysians to uncage their creative potential and to remind them that every great piece of creative work starts the same way. They just need to be brave and take that first step. 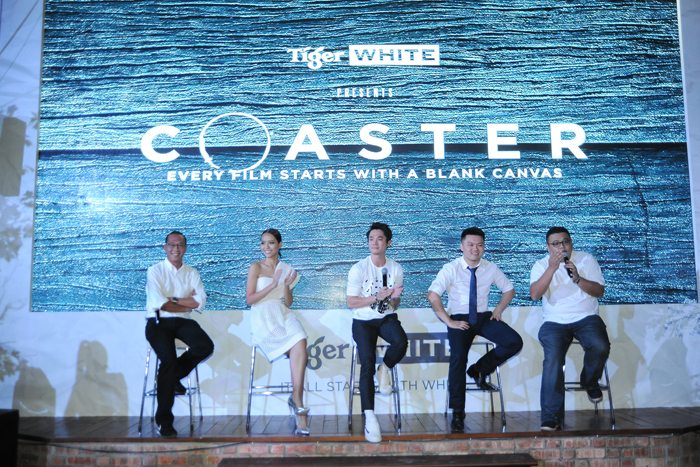 A Q&A session with the cast and crew after the screening of Coaster. 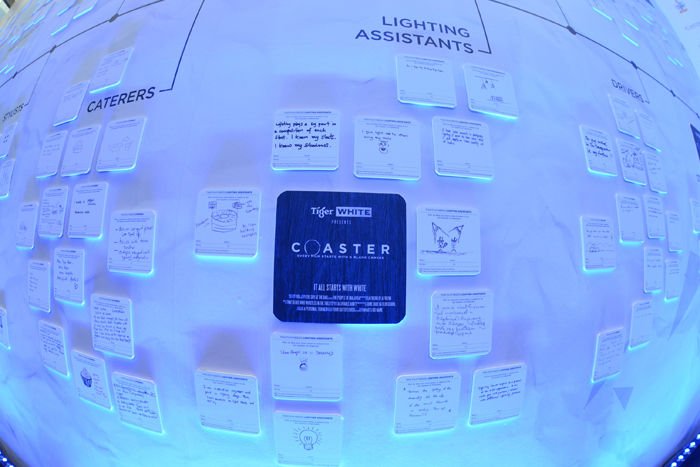 Sample coaster submissions to the crowd-sourcing initiative mooted by Tiger White for the world’s first film made from beer coasters.

Tiger White is brewed with subtle spicy hints of clove, coriander, and orange peel and like Coaster, is made exclusively in Malaysia by Guinness Anchor Berhad. The cloudy variant with an alcohol by volume of 5% is the latest addition to join Tiger’s expanding portfolio, two years after the brand unveiled its other innovative beverage Tiger Radler – a variant that combines the crisp and easy-drinking taste of Tiger Beer with the zesty flavour of natural lemon juice. 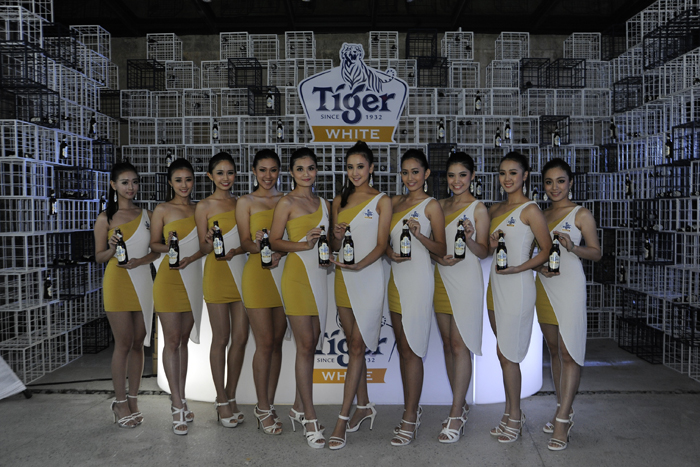 Tiger White brand ambassadors at the Coaster premiere held at Glasshouse at Seputeh on Dec 19. 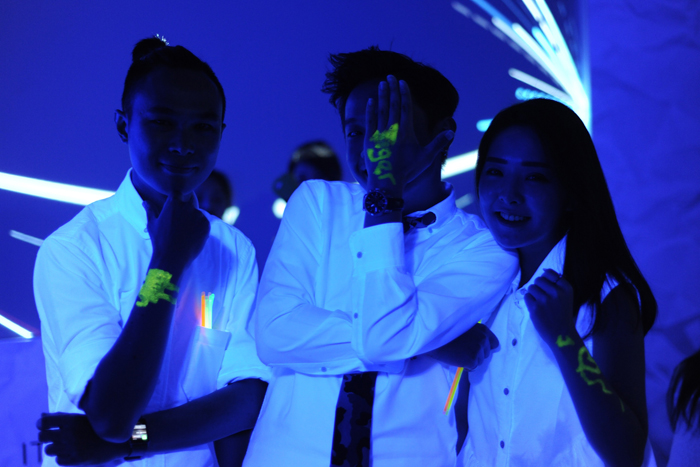 Guests having a good time at the after party of Coaster’s exclusive screening.

To watch Coaster, or view behind-the-scene footages, visit tigercoasterfilm.com And for further information on Tiger White, log onto www.tigerbeer.com.my