KUALA LUMPUR, 30th November 2019: Fire is a force with an awesome transformative power. When it comes to food, fire is what turns simple raw ingredients into mouth-watering meals. Guinness, Malaysia’s No. 1 Stout, understands this better than anyone – the barley used to brew Guinness is roasted at exactly 232°Celsius, which gives the beer its distinctive dark colour and delicious roasted flavour. 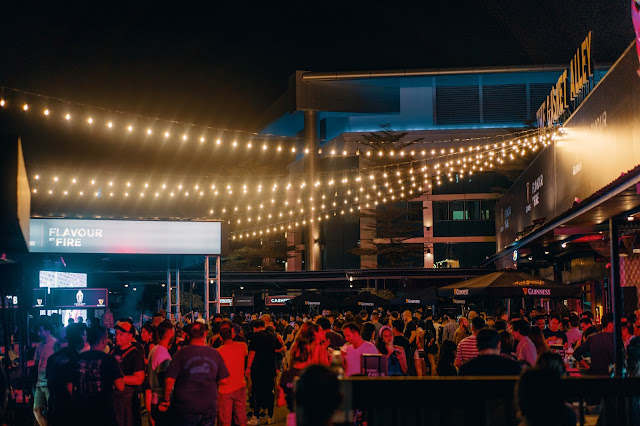 “There’s something very special about cooking food over fire – from campfires to barbeques, it brings people together in a way you don’t get using other cooking methods. Guinness has a similar effect – it’s the perfect way to celebrate getting together with friends and family for some quality Guinness Time.” said Archana Sridhara, Marketing Manager, Guinness & Diageo Brands at HEINEKEN Malaysia. 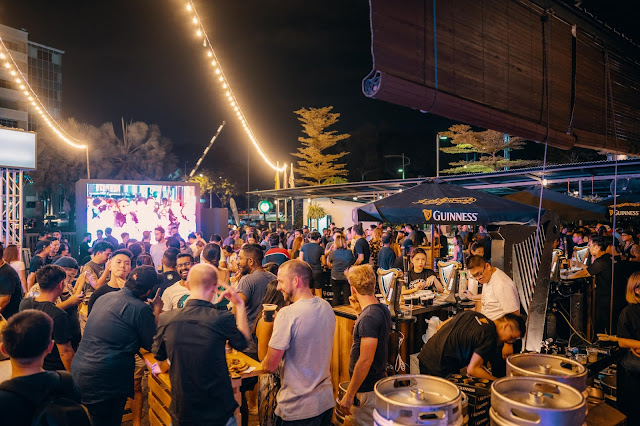 “The fact that Guinness pairs so perfectly with roasted and barbequed dishes, and that we use fire to give Guinness its unique colour and flavour by roasting our barley at 232° Celsius makes Guinness Flavour by Fire a great way to express everything Malaysians love about Guinness.”, she added. 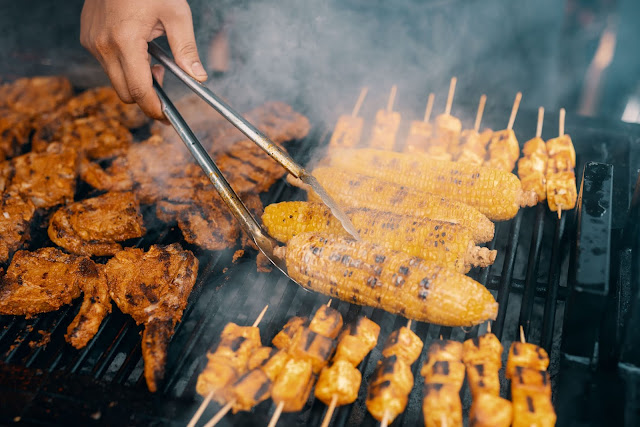 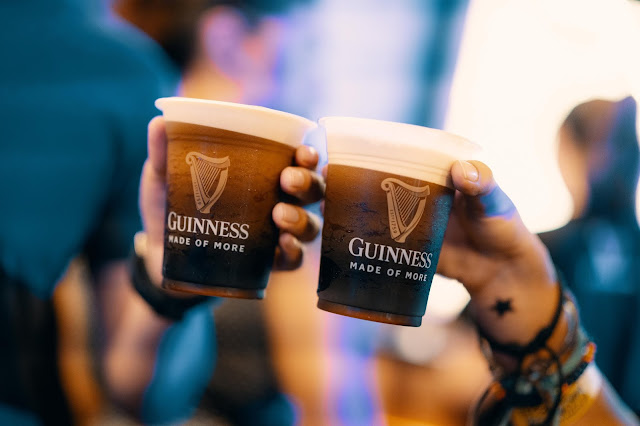 Celebrating this transformative power of fire, the Guinness Flavour by Fire festival brought together some of KL’s hottest chefs and musicians for a two-day feast for the senses at The Gasket Alley in Petaling Jaya. Serving up a range of delectable dishes for the thousands of hungry party-goers in attendance were five chefs, each with their own signature styles and techniques. 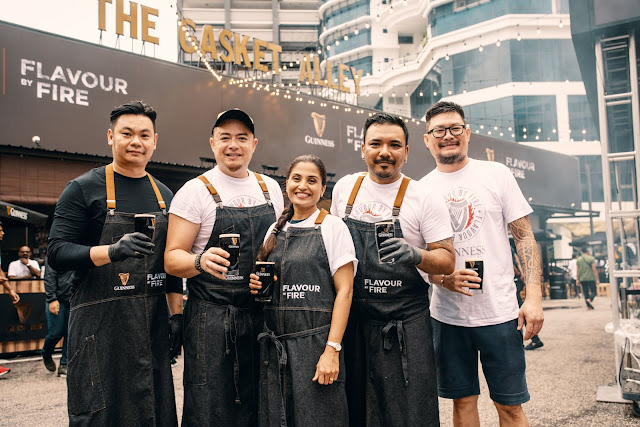 Celebrity chef Sapna Anand, from GOA by Sapna, took inspiration from traditional Indian barbeque recipes for her menu, including her signature Kashmiri lamb chops. Marinated in roasted spices and citrus and cooked over a charcoal grill, the beautifully tender lamb with its delicate balance of flavours and flame-seared exterior paired perfectly with the cold, smooth Guinness Draught. It’s not only meat which benefits from cooking over an open fire, as Sapna proved with a range of vegetarian options including smoky marinated paneer and barbequed corn, coated in a chili rub and caramelised to perfection in a way that only flames can create. “Spices have their natural oils, but what gives them life is when it hits the heat. When the fire-roasted spices mingle with the fat in the meat, dripping down onto the coals and releasing the smoke, it gives the dish a completely different flavour than cooking in a pan, for instance.” said Sapna. 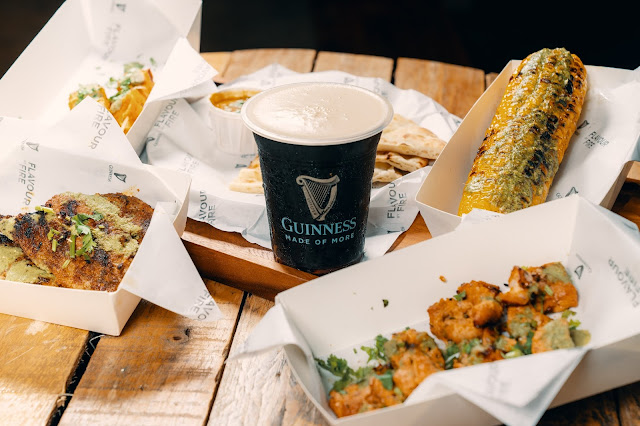 A selection of dishes from Chef Sapna Anand of GOA by Sapna, paired with Guinness

Chefs Sherson Lian and Johnny Fua from Kitchen Mafia put on an eclectic mix of dishes, melding Western and Asian influences to create surprising takes on a range of favourites from seafood to duck. Cooked over an ‘outback-style open fire’, the duo used locally-sourced wood including bamboo and rubber wood to give each offering a unique flavour unlike anything cooked in a traditional kitchen. 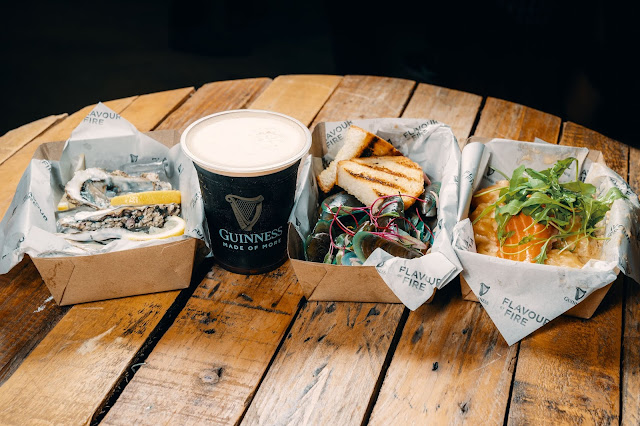 A selection of seafood dishes from Kitchen Mafia, paired with Guinness

Firm favourites included pineapple and red pepper-marinated leg of lamb, roasted slowly on a chain suspended above the flames and served with a Guinness-infused rosemary sauce, and mussels in a flavoursome rice wine broth cooked inside sections of bamboo trunk.“The rich, roasted aroma of Guinness – because the barley goes through the roasting process, unlike other types of beer – means it pairs beautifully with the fire-roasted dishes we’ve cooked for Flavour by Fire. And because the Guinness is served cold, it makes it a really refreshing accompaniment to the heat of the food.” commented Johnny Fua. 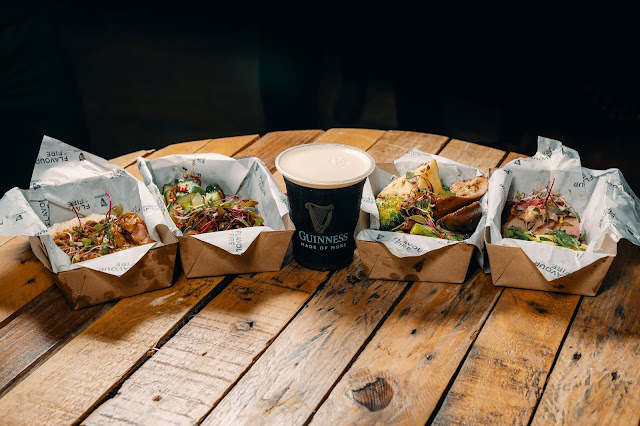 A selection of dishes from Kitchen Mafia, paired with Guinness

Suren Krishnan, from Tipsy Boar, agreed: “The creamy, bold flavours in Guinness pair well with the style of barbeque we do, which also has a pretty bold and robust flavour profile.” Suren’s style, a mash-up of Southern USA, European, and Asian barbeque techniques, focused – as the name of his restaurant suggests – on various cuts of pork. Artisanal chorizo and German sausages, Kansas-style spare ribs, and pork knuckle slathered in a Guinness glaze were cooked in a ‘low-and-slow’ style over wood fromlocally-grown mangrove and fruit-trees. The end result: melt-in-the-mouth, rich and satisfying dishes which had attendees clamouring for more. 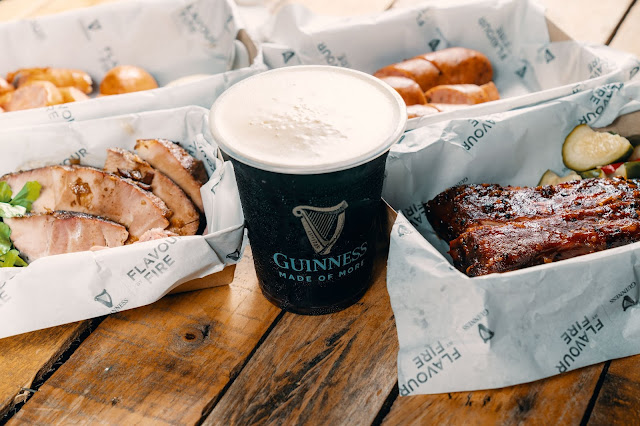 A selection of dishes from Chef Suren Krishnan of Tipsy Boar, paired with Guinness

Meanwhile, Pitmaster Kok Fung, from Texas Barbeque joint Burnin’ Pit, harnessed the power of fire in a similar way. His signature dish, dry-rubbed beef brisket, was smoked for over 12 hours to impart an incredible depth of flavour to the mouth-wateringly tender meat. The wood used in the smoker – tropical fruit trees such as mango, jackfruit and durian – added a Malaysian twist to his authentic, rustic style. Served up with pickled mangos, gherkins and jalapenos and a smoky Gula Melaka and berry barbeque sauce, the cold, smooth Guinness contrasted with the sharp and sweet flavours of the sides and the richness of the meat to create a well-rounded flavour experience. 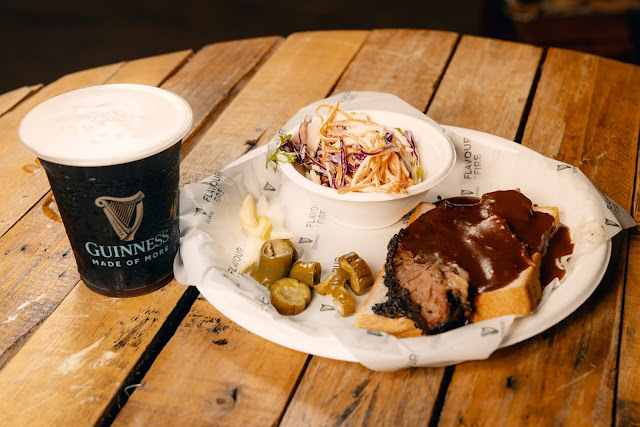 This being a Guinness event, there were plenty of other activities to keep attendees entertained after they had feasted on all the food on offer. Performances from fan favourites Kyoto Protocol, K-Town Clan, Crinkle Cut, Church Mouse and Skits got people moving on Day 1 of Guinness Flavour by Fire, while Day 2 saw Jumero, Kaya, Dani Komari, Samantha Diana and Muzza and Arjuna take the stage to heat things up. 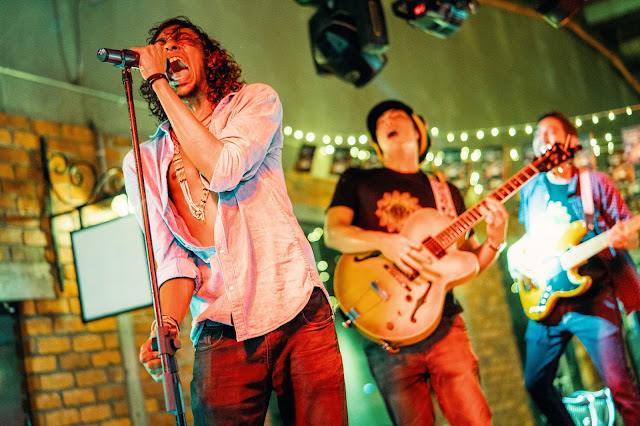 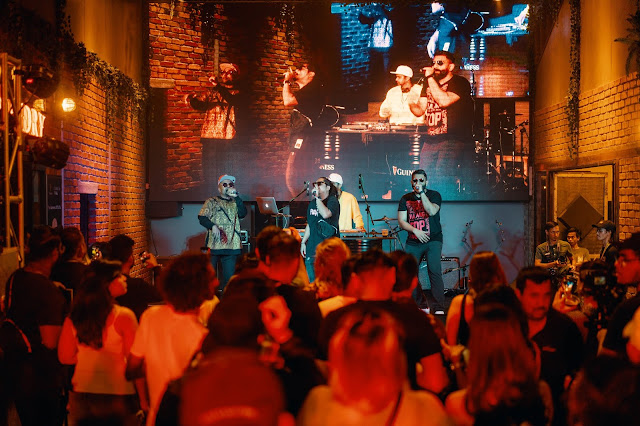 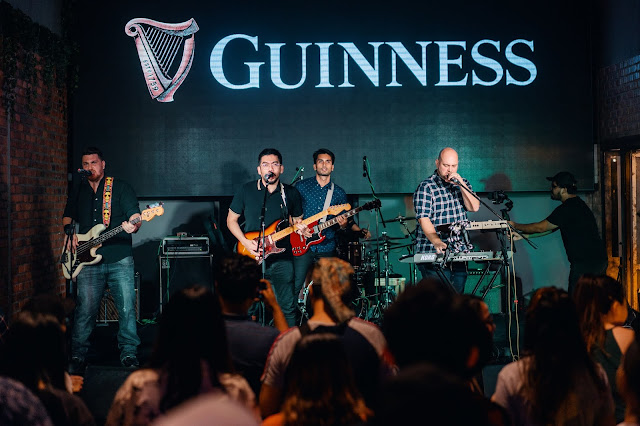 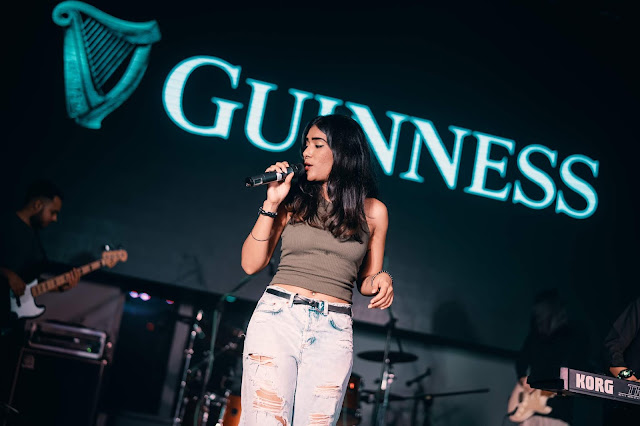 Perhaps the most popular activity was the Guinness STOUTie machine – a device which uses a malt extract to print a selfie directly onto the head of a glass of Guinness. Previously only available at the Guinness Storehouse in Dublin, Ireland, hundreds of people lined up to get this exclusive opportunity at Flavour by Fire. 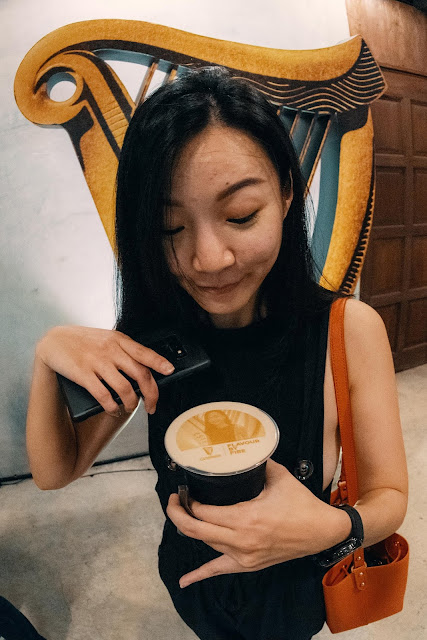 A Guinness fan with her STOUTie at Guinness Flavour by Fire

For the real Guinness aficionados, the chance to learn how to correctly execute the famous Guinness ‘Two Part Pour’ also proved enticing – especially as their teacher was none other than Guinness Expert Cian Hulm. 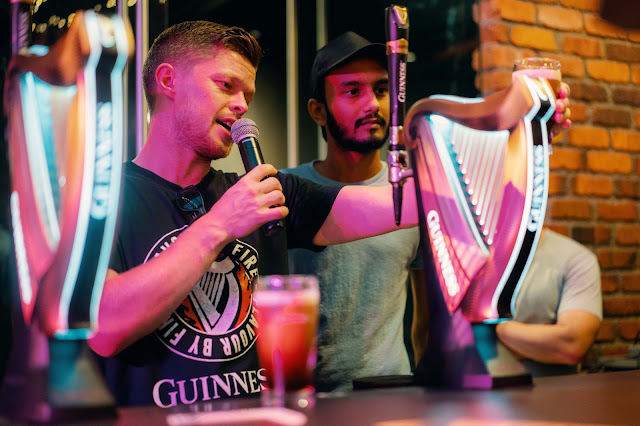 Finally, the return of the Guinness Long Bar Challenge – previously seen at Guinness St. Patrick’s Day events – gave party-goers the chance to get their hands on exclusive Guinness merchandise by sliding a bottle of Guinness down a bar in a test of skill and precision. T-shirts, bottles of Guinness-infused steak and barbeque sauces, and handmade Guinness chopping boards – perfect for serving up your own home-made fire-kissed dishes – went home with the winners across both days of Flavour by Fire. 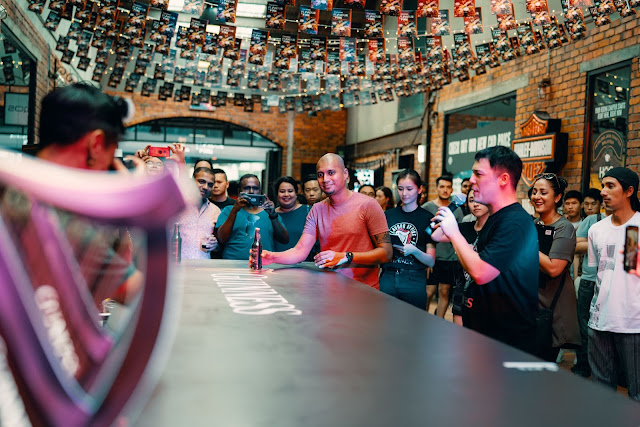 For more information on Guinness and to keep an eye out for future events, check out facebook.com/guinnessmalaysia.