Carlsberg BPL Viewing Party Finale, It was mere weeks ago when Carlsberg hosted the getaway of a lifetime for its consumers at the Ultimate Football Retreat in Avani Sepang Goldcoast Resort. The weekend was a one-of-its-kind football fans’ fantasy come to life, as they got up close and personal with four living legends of Barclays Premier League – Dennis Wise, Gianfranco Zola, Steve Mcmanaman and Sol Campbell! 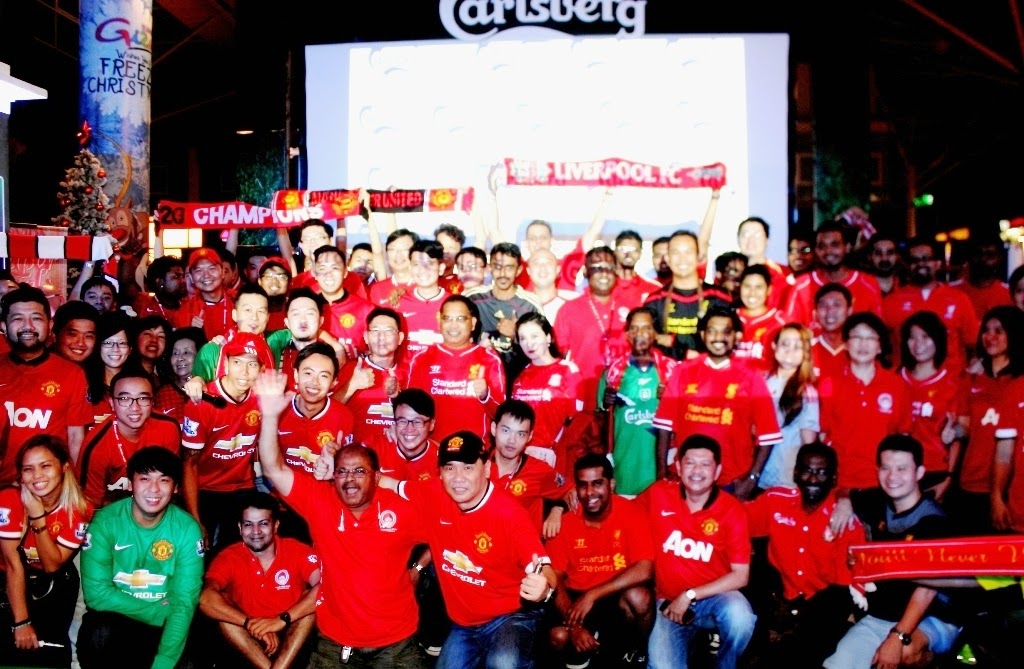 Football fans gather in a lively show of support for their teams at the Carlsberg Live Viewing Party.

Right on the heels of this once-in-a-lifetime experience, Carlsberg upped the ante with yet another unique BPL gathering for footie fans when two giants of the Barclays Premier League went head to head recently at one of the most anticipated matches of the season.
The friendly rivalry went beyond the pitch as die-hard local fans of the competing football teams Manchester United and Liverpool in the Klang Valley decided to take up the challenge of pitting their football prowess against each other at the live match viewing party organised by Carlsberg at Movida, Sunway Giza. 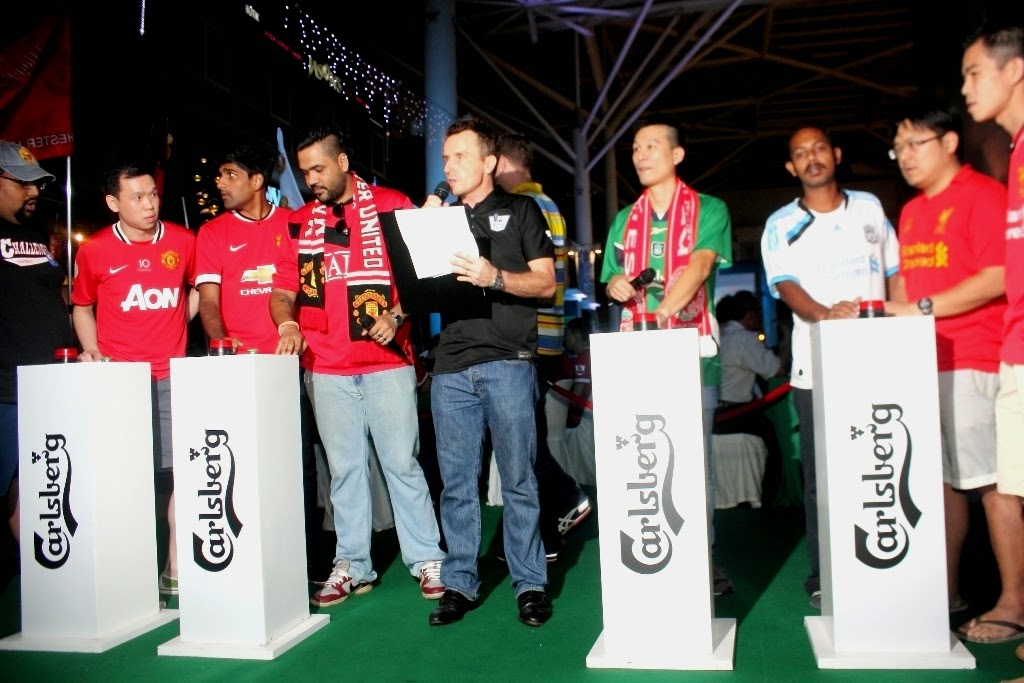 To add to the fun, Carlsberg had an array of exclusive BPL merchandise to give away as prizes, the most coveted of which were rare autographed jerseys from the Liverpool and Manchester United teams, each signed by the full 2014/2015 squad of the respective clubs! In addition, other unique club memorabilia also awaited prize winners, such as the custom-designed, specially packaged limited edition 1 pint Liverpool-Carlsberg beer bottle in green and red that featured the Liverpool emblem, being given out for the first time.
The venue was a sea of red as Carlsberg fans of both BPL football clubs showed up in full force to support their respective sides dressed in their teams’ fiery colour.
With local fan clubs Manchester United Supporters Club and Liverpool’s KL Kopites also making their presence felt, there was no lack of enthusiastic support for either the Red Devils or rival team The Reds. 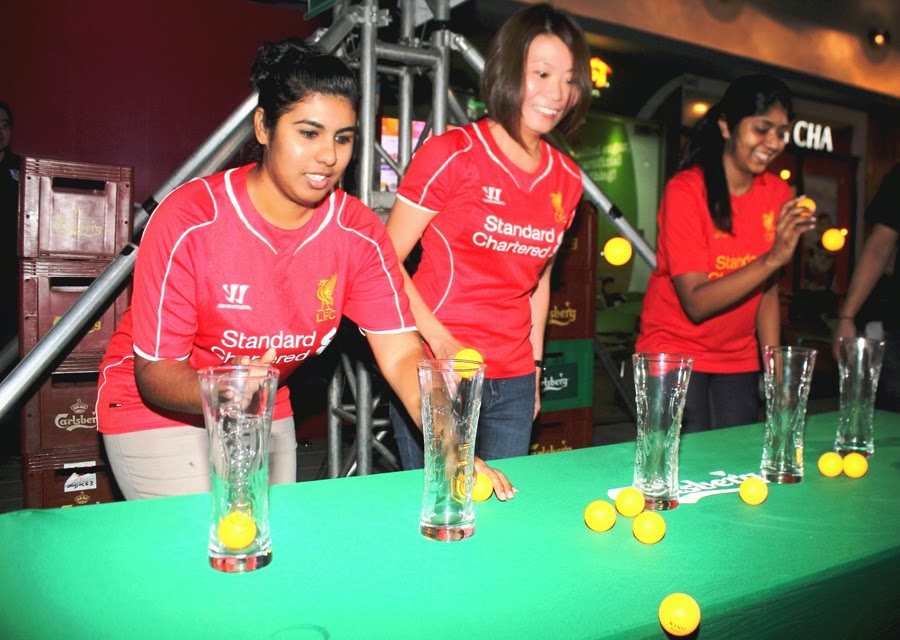 Female fans join in the fun during pre-match games.

The evening fittingly kicked off with a BPL quiz hosted by ESPN’s Jason Dasey, with fans vying for bragging rights on who knew their teams best. Gruelling questions from Dasey didn’t deter the crowd one bit from responding, as they tried to outdo each other to make their clubs proud amid friendly banter and camaraderie. Fans also tried their football skills in fun telematch games including trying to score goals into a mini inflatable goal post while blindfolded. 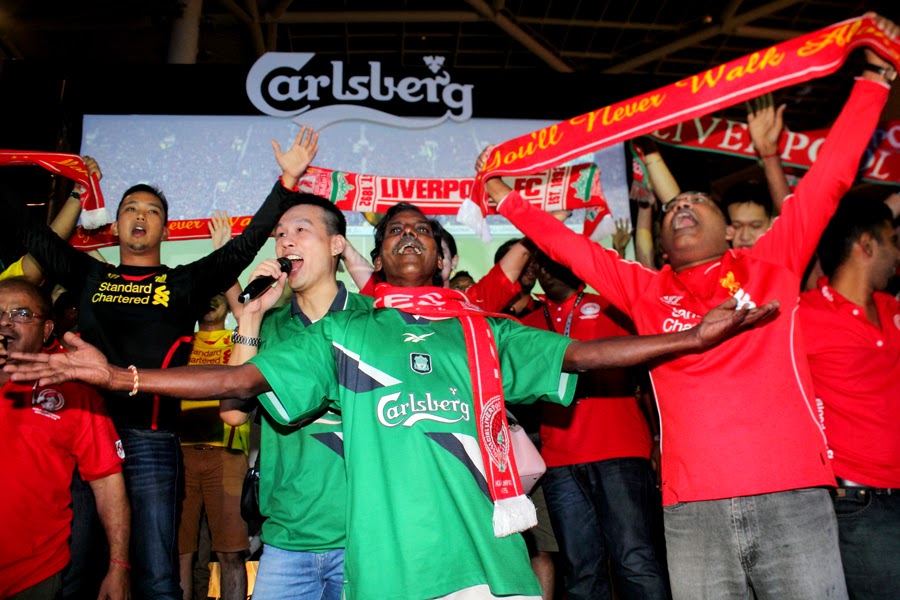 Liverpool fans boisterously sing their team anthem before the match kicks off.

Juliet Yap, Marketing Director of Carlsberg Malaysia, said, “There is nothing quite like the bond of football to bring people together. As the official beer partner of Barclays Premier League, it is our aim to continue providing our consumers with the best of the best when it comes to football. With the rights, access and network to the world’s most popular football league, we want our consumers to fully enjoy this privilege. This is why we at Carlsberg took the opportunity to bring our fans and lovers of football together for another unique and exciting showdown, both on the pitch and off, over some ice-cold Carlsberg beer. The evening undoubtedly saw both teams’ fans show a shared love for the beautiful game and our brew. Now that calls for a Carlsberg!” 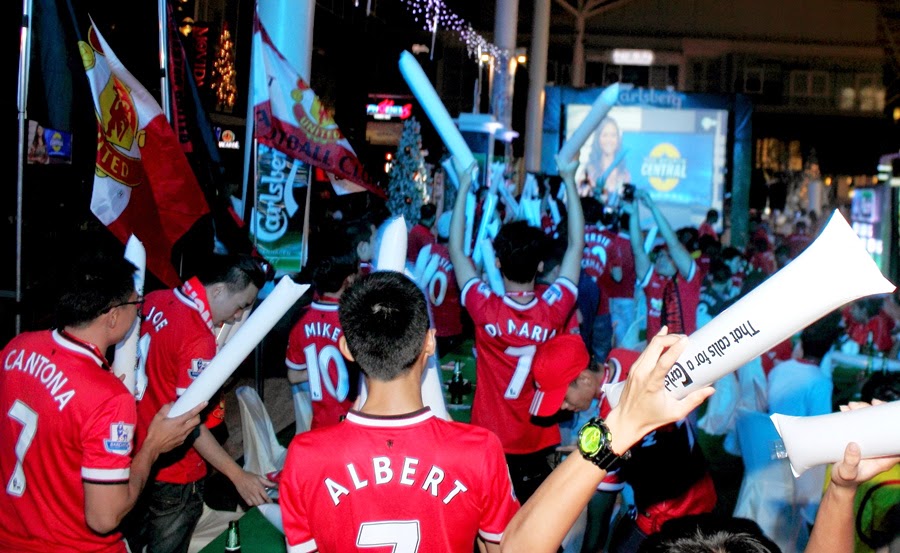 Rathakrishnan, president of KL Kopites said, “I’ve been wearing Carlsberg on my chest for a good number of years now, and we are very grateful that Carlsberg Malaysia and the local fan club have a strong relationship. Carlsberg definitely has a special place in my heart. Also we are very pleased that Carlsberg brought all of us together to view this English Classico match.”
On the opposing side, William Phang, president of the Manchester United Supporters Club Malaysia expressed his gratitude for the many footballing events that have been brought to fans by Carlsberg. “We are also thankful for the kind of events that Carlsberg organises, from bringing down international legends like they did to the recent retreat, to viewing events, where Malaysian fans can gather despite team preferences, to cheer on clubs in a friendly manner.”
The match between Manchester United and Liverpool culminated in a 3 – 0 win by Manchester United.
Find out more about Carlsberg’s Barclays Premier League Viewing Parties and upcoming events in the 2014/2015 BPL season at Carlsberg’s Facebook page https://www.facebook.com/CarlsbergMY